When someone says to you, “This is the kind of car that I cannot own, or I would lose my license in less than a month,” you know there’s something to it. In reference to the new 2014 BMW 435i xDrive coupe, I had to know, as will you, what exactly makes this sexy beamer such an appealing and exhilarating car to drive.

When someone says to you, “This is the kind of car that I cannot own, or I would lose my license in less than a month,” you know there’s something to it. In reference to the new 2014 BMW 435i xDrive coupe, I had to know, as will you, what exactly makes this sexy beamer …

My excitement begins to ignite when I see the car, but for reasons that are subtler than you may think. For example, the grille can pass for the flared nostrils of an aggressive animal. The slit eyes or LED headlights include two circles that are eerily similar to those of a spider. Last of all, the vent under the grille gives the vehicle a predator’s look. All together, the beamer appears to be quite aggressive, and that’s probably because it’s hiding a mean machine under the hood.

The 3.0-litre BMW TwinPower Turbo inline-6 engine clearly adds to the ticket-worthiness of the coupe, and is said to offer better performance and fuel economy overall. As for power, you can expect the engine to produce a total output of 300-horsepower, and 300 pound-feet of torque between 1,300 – 5,000 rpm. The vehicle can be mated to an 8-speed Sport automatic transmission with steering wheel-mounted paddle shifters, but I prefer the 6-speed manual. With it, I sense a greater connection with the car due to the clutch-gas pedal footwork and the shifting of the gears.

In terms of performance, the 435i xDrive (all-wheel drive) has a top speed of 250 km/h. For the 0-100 km/h acceleration, BMW rates it at 5.3 seconds when equipped with the manual transmission, which is 0.3 seconds faster than the 435i RWD. Equip it with the automatic transmission xDrive and you can shed off another 3 seconds. All in all, it’s enough to give you a rush.

Features to enhance your experience

Even with the turbocharged engine or the 300 hp, BMW has equipped the vehicle with features to further enhance and vary the driving experience. An example of this are the driving modes: Eco Pro, Comfort, Sport and Sport+. When selecting the last two modes, the height of the car is lowered by 10mm. The Sport+ mode also deactivates Dynamic Stability Control. Furthermore, there are “air breathers” or vents on the side of the car that helps to reduce drag.

In testing the 2014 435i xDrive coupe and noting all these elements, I’m beginning to think that I too might lose my license. At the very least, I may get a hefty ticket.

It’s tempting to keep pushing the coupe forward in what seems like a jet-like fashion, swerving around corners and past other vehicles. The coupe provides athletic handling, which works well in your favour as it reacts in such a way that helps to instil a greater confidence in the driver – even with instantaneous manoeuvres.

If you opt for Variable Sport Steering and the Adaptive M Suspension, which is equipped in the 2014 435i xDrive tester, it is said to provide “optimum” handling and increased agility. That, and the electronically controlled dampers do a pretty good job of dimming down the shaky, spring-like effect of driving over potholes and ruts.

Apart from that, you may want to pay attention to the manual gear shifting. When it’s clearly time to shift up from say third, the gear may not seem ready to fully jump into fourth. You may feel like you’re in no man’s land, but it shouldn’t put a damper on your day.

On the plus side, the beamer comes equipped with a variety of safety features. One can expect 4-wheel ventilated disc brakes with anti-lock ranking system (ABS), along with dynamic and cornering brake control. Dynamic stability and traction control are also included.

BMW’s Assist eCall for emergencies, lane departure warning and blind spot monitor technologies are worth considering, and a backup camera is also available.

Safety aside, cruise control, Bluetooth connection, HD radio, and a premium sound system are among the features that come standard. Heated and leather front seats, satellite radio, a heads-up display, and navigation system are available, depending on the model/ package.

As for the comfort factor the interior is tight, but somehow it’s less noticeable than you may think. Things are positioned in such a way that you will feel less cramped. Also, little tidbits like the automatic front-seat safety-belt presenters save you from constantly turning around and reaching for the seatbelt. The easy electronic seat adjustment makes life that much simpler too, and I love a car with a seat memory.

For rear comfort, I had my brother-in-law (5’10”) sit in back. Aside from slightly cramped legroom, the space is moderate in that headroom. Cargo volume however, is bigger than expected, and you can fold the rear seats down almost flat.

The base 2014 BMW 435i has a starting price of $55,600 MSRP, although if you pack it up with the features equipped in our xDrive model, the price jumps to over $70K, taxes, transportation and preparation included.

Finally, fuel economy ratings for the manual AWD model is stated to be 10.5/7.0 litres per 100 kilometres (city/highway). In reality, the ratings will depend on your driving behaviour. Mine resulted in an average of 12.0 L/100 km over 472 kilometres, and my driving pleasure totally justifies it.

The 2014 BMW 435i xDrive coupe clearly combines the right elements. From exterior styling that hints to the mean machine lurking under the hood, plus all the additional technologies and overall comfort factor, I can see why someone would be afraid to lose their licence as this coupe is indeed ticket-worthy fun. 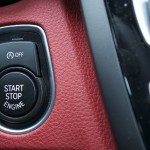 © 2021 LuxuryCarMagazine.com - All Rights Reserved | Powered and Designed by NetMedia 360 Inc.
Scroll To Top